Home › Articles›News › What colour is best for blue meanies mushrooms to turn into?

What colour is best for blue meanies mushrooms to turn into? 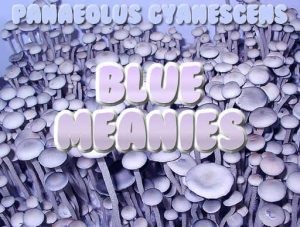 What Are Blue Meanies Mushrooms

Blue meanie mushrooms is a strain of mushrooms that were first introduced in Australia. It is becoming more popular as other countries are becoming aware of the strain, like Bali for example. The name blue meanie comes from its appearance of blue bruises on the stems and caps. It is said the bluer the mushroom the more intense the trip.

Where Are Blue Meanies Found?

Blue Meanie mushrooms are found in manure of grazing animals. They will be scattered across the land of dung or in clusters. You can find them in mostly tropical regions like, Africa, Australia, Europe, Hawaii, India and a few other countries or regions. Though not impossible, it may be difficult to grow blue mean mushrooms due to its specific habitat.

How They Are Different From Other Mushrooms

Although the blue meanie is a form of the magic mushroom, it differs from other

Mushrooms. You will find an ample amount of psilocybin, which is more psychedelic than some other common mushrooms. The mushroom contains black spores and a blue appearance.  The blue streaks are caused by chemical reactions when exposed to the air. If found growing, it could be identified by its blue colour. As for the taste, which is said to be flour-y and starch-like, as well as the smell.

Just like any other magic mushrooms, the purpose of the blue meanies, are used for its psychedelic effects. It is said to be denser than others and is great for beginners if never ingested special mushrooms before. It is great for anyone looking for a different kind of high or hallucinations. Microdosing is becoming more popular as it is done by taking small amounts of mushrooms in a certain timeframe. The purpose of microdosing is to combat mental health and to improve mood. It is important to know the proper dosing and its effects to experience in the safest way.

What Colour Should The Blue Meanie Mushrooms Be

There are many ways to identify the blue meanies. Their appearance presents black or dark purple spores on the cap of the mushroom and you will be able to see blue bruising or blue streaks. The blue can be found on both the cap and the stem of the mushrooms. Although the blue meanies are obviously blue from its self-explaining title, other mushrooms can also be blue in colour.

Who Are They For?

If you find the Blue Meanie Mushrooms intriguing, then they may be right for you. You can discover its effects and how it personally affects you.

2 comments on “What colour is best for blue meanies mushrooms to turn into?”