Medical cannabis industry growing in Australia. Australia’s legalisation of medical cannabis in late 2016 is creating a rapidly expanding industry. While a local industry becomes established, the federal government is fast tracking importing cannabis for patients with prescriptions. The world’s most advanced cannabis strain genetics come from BC Seeds in Canada.

Australia has joined the US and Canada where cannabis is a fast-growing industry. Medical cannabis has agricultural potential for a new industry for Australian farmers worth an estimated $100 million a year. A new industry farmers need to value-add to their agricultural operations. But, they will have to compete with the big Canadian and US companies. These are already positioning themselves as main players in the Australian cannabis market. The government has received applications from 25 companies to grow and manufacture medical cannabis products.

The first medicinal cannabis crop is on the ground in Victoria. Trials are underway to test its effectiveness treating epilepsy. 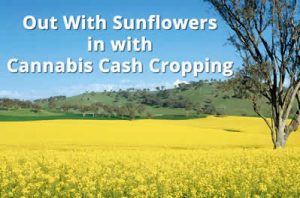 Cannabis as the future for agriculture

Most applications to grow medical cannabis are for greenhouse growing, rather than as a broad acre crop out in the open like sunflowers. This is a problem for small farmers. Most do not have the expensive infrastructure required for greenhouse growing. The main reason for using greenhouses is security and to control the growing environment.

Whether cannabis is a cash crop of the future divides opinion. There is no limit to the number of cannabis licences the government grants. Applicants must first receive a research licence and permit for medical cannabis. The permit outlines the type of cannabis the permit holder can grow. To receive a cannabis permit, you must also pass as a ‘fit and proper’ person assessment. If you have a serious conviction recorded against you in the past decade, there is a mandatory exclusion.

Former WA Liberal MP, GP and AusCann chairman Mal Washer said the legislation passed federal parliament in a unanimous vote. Every parliamentarian voted in favour of the legislation, which is unusual. Dr Washer said farmers would one day benefit from the new market. He said the market may only be open to a few organisations who can meet the strict criteria in the beginning. But there is a place for farmers to move into the industry.

Australian Medical Association national president Dr Michael Gannon is sceptical. He said medicinal cannabis had limited use in a clinical situation. And, that it is an inferior medicine when it came to comparing it with pharmaceutical drugs for managing conditions. He could not see cannabis becoming a new ‘cash’ cop for farmers.

Western Australian farmer Jack Bendotti planted a 4-acre crop of industrial hemp with success. He said that currently there was no point growing it until production facilities were available. And there will be no production facilities until there is raw bulk material available. He is keen to grow hemp for the medical market once the market becomes established.

AusCann CEO Elaine Darby said the partnership was complementary. She said Canopy Growth brought a high level of knowledge and expertise to the Australian industry. AusCann were waiting for an outcome of the licence application before proceeding.

AusCann are looking at a suitable site close to Perth. They have contracted a security firm to complete a risk assessment of the likelihood of diverting cannabis to the black market from the area.

Ms Darby said they planned on using greenhouses with retractable roofs. She the reason for this was to maximise control of the growing conditions as well as for security. Growing cannabis outdoors reduces the plants to producing a single crop a year. With controlled conditions, you can get three to four crops a year.

A pharmaceutical company in Melbourne is manufacturing and packaging medical cannabis for two trials in NSW. The company cannot be named for security reasons. The CEO said there was interest in growing cannabis in Australia as it is difficult to import. Medical Cannabis takes up to 60 days for the product to arrive. It is also difficult to transport medicinal cannabis products between countries with all the paperwork required. It makes sense for Australia to create a self-sufficient industry

There are also opportunities for seed banks and oil extraction companies to supply cannabis oil for the manufacturing process. There are two ways used to extract the oil:

Victorian company has licence to grow

Cann Group in Victoria is the first to receive a research licence after its successful first harvest. Chairman Allan McCallum said the company was researching the medicinal qualities of the plants. They have now applied for a licence to cultivate medical cannabis with low THC levels. They can begin operation within two to four weeks of receiving a permit.

Australia’s new acceptance of cannabis as an alternative medicine is sparking much interest. There is rapid growth as interested parties compete for a piece of the action. The medical cannabis industry growing in Australia is on a rapid pace and it won’t be stopping anytime soon.