Medical cannabis now legal in Australia. Australian cannabis industry is set to grow. With this, comes interest in investment into commercial cannabis from the corporate world. What was once just whispered about on the streets and behind closed doors, is now seen as an industry with multibillion dollar future. Many years of lobbying from the medical sector and patients has finally had a positive result. But, it is only a start. Australian state laws need sorting out as it is still illegal in most states. Also, a national regulator for the industry needs setting up.

One of those corporate investors with their eye on the Australian cannabis industry, is Canadian company Tilray. Early in 2016, the NSW Government, University of Sydney, Tilray and Chris O’Brien Lifehouse announced medicinal cannabis trials. One of the largest medicinal cannabis trials carried out in the world, it targets the side effects of chemotherapy patients. The joint collaboration will investigate the safety and effectiveness of a Tilray developed cannabis-based drug. This drug aims to control the nausea and vomiting associated with chemotherapy. Statistics say that at least 80% of chemotherapy patients have these side effects during chemotherapy. 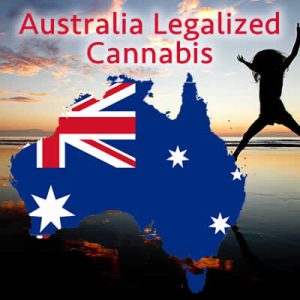 Medical cannabis now legal in Australia and we’re all jumping in joy. Tilray is developing the drug in its state-of-the-art greenhouse. These can hold 100,000 plants with at least 50 strains of cannabis. The company employs a team of skilled experts to cultivate the cannabis to develop alternative medicines. Once the drug is ready for the trials later this year, Tilray will export it to Australia.

Tilray also intends to get in at the grassroots level of the cannabis industry in Australia. It hopes to invest up to $20 million to establish commercial cannabis growing in Australia. The company expects to employ up to 100 local staff. They are waiting for the finalisation of Australian and NSW government laws and regulations, as well as licences.

Another company with its sights set on the Australian commercial cannabis industry is the Israeli company, MGC Pharmaceuticals. Australian company Erin Resources Limited acquired MCG in April, 2016. MGC has a commercial cannabis operation in Slovenia. Here it grows and extracts cannabidoil for its skin care products. MGC also plans to start commercial operations in Australia when the regulatory and licencing systems are in place.

Tilray and MGC intend to offer their cannabis-based medicinal products on compassionate grounds. This means that eligible people can get the drug at a lower cost through the Therapeutic Goods Administration’s special access program.

While the governments work on state and national regulations, there is much work being done moving forward to help seriously ill patients in Australia. And, it could be, the first commercial crops will be legally grown starting in 2017.

You can order cannabis seeds here