The owners of the Melbourne Airport precinct, Australia Pacific Airports (Melbourne) (APAM), will manage and finance the 37,000 sqm building. Greenhouse specialists, Aurora Larssen Projects is designing and building the facility. Cann Group will invest $100 million on fitting it out and on the technology required to run the operation. It plans to hire 170 staff on completion of the project to work in the facility.

The Cann Group shares shot through the roof after the June announcement. It was listed on the ASX. Its shares were worth 30 cents in May, 2017. In June it rose up to $2.98 per share. Cann CEO Peter Crock said the original proposal was for a 16,000 sqm building. He said the bigger building positions them to become a leading supplier of medical cannabis in Australia and overseas.

APAM chief of property Linc Horton said the Cann Group’s plans for the Melbourne Airport precinct is consistent with their strategy. He said they had a strategy was to work with good quality long-term tenants. It is also important that tenants want to link Victoria’s industry across the world. Being at the airport makes access for transporting product simple and cost-effective.

The lease agreement allows Cann to grow, manufacture, store and distribute medical cannabis. Australia has lot of red tape for all the government approvals required.

News of the airport cannabis comes after the Federal Minister for Health Greg Hunt’s announcement. He announced that all states and territories had now signed up to a national health scheme. This will make approval much easier for patients waiting to access prescribed medical cannabis. Currently patients prescribed cannabis have a long wait for access. They need double approval from the state they live in and the Therapeutic Goods Administration.

Hunt said this was good news for patients as it will give them faster access to the medical cannabis they need. He also said the decision to prescribe cannabis was up to Australian doctors. Once people have a prescription, patients should have access within 48 hours.

Hunt said this new agreement removes all the barriers. Patients will now have their medical cannabis prescriptions filled without long waiting times. Doctors were reluctant to prescribe medical cannabis because of the long wait and now the wait is no longer there. Already there has been a dramatic drop in the waiting time for medical cannabis in New South Wales under the scheme. Now patients only wait two days instead of the previous two months. 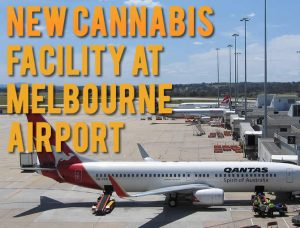 The new Melbourne Airport medical cannabis facility will speed up delivery to patients.

One comment on “New cannabis facility at Melbourne Airport”