Dr Pot defies the law to administer medical cannabis. Arrested again, the infamous Andrew Katelaris, had police raid his Sydney home. This came only days after appearing on the Channel 7 Sunday program in May in connection with administering cannabis oil to a 4-year-old boy. Better known as Australia’s Pot Doctor, he entered no plea. He received $5000 bail to appear in Hornsby Court on June 28.

During the weekend before his arrest he was attending the Hemp Industry Forum in Sydney. Police raided the forum on the last day after a report of a large cannabis crop on display. Police made no arrests as the display had prior approval and was low-grade THC hemp.

Katelaris is a deregistered doctor well known for his advocacy of medicinal cannabis. He has researched it since 1990. Struck off the medical register in 2005 for supplying cannabis to friends and family. He says he had a choice to supplying cannabis or be struck off the register as a doctor. Katelaris said it was an easy choice when it comes to the benefits of medical cannabis. 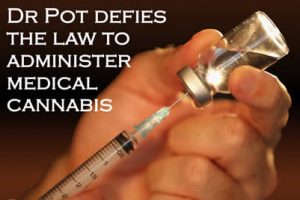 Katelaris has a chequered past with several arrests. He defies Australia’s laws and admits he supplies children with seizures high-THC oil. He makes no apologies for his type of research believing in what he does. But, there are concerns. And, there is only anecdotal evidence of the positive results of his products.

Dr Pot as Dr Katelaris, has a mad scientist approach to what he does so it makes it difficult to know what is real. Although struck off the medical register in 2005, he continues to pursue his beliefs. In 2016, his involvement in an experiment gone wrong brought him further trouble.

In September 2016, Katelaris injected two women with cannabis oil at a wellness clinic in Newcastle, NSW to treat ovarian cancer. Both women were in their mid-50s and one had stage 3 ovarian cancer. Immediately after the injection, both women experienced severe stomach cramps.

Katelaris was trying something new. Something that no one had tried before on a human being. He injected the cannabis oil straight into the stomach cavity. Both women suffered severe reactions and one died a few months later. Katelaris said she was likely to die anyway with stage 3 ovarian cancer.

He admits to buying cannabis on the black market and not testing its potency before administering it. Katelaris told the inquiry he tested it a week after administering it to the women due to delays through Customs. He also said if he known its potency, he would not have used it. Katelaris says his intention was to inject the cannabis oil directly into the cancer cells in the stomach cavity. He shows no remorse for the results of this experiment. He has no scientific data to support his research. Katelaris has no intention of stopping cannabis oil supplies to those he says need it.

Both women had severe side effects immediately after the injections. It was two days before Katelaris took them to two separate hospitals. One woman’s complications from the experiment caused delays in her chemotherapy. This contributed to her death in February, 2017. Prior to the experiment she voiced her concerns. She wanted to talk to her oncologist, but Katelaris dissuaded her.

Katelaris had a reputation as a surgeon before his deregistration. But now appears to hold authorities in contempt or feels himself superior. He defended the experiment to the Health Care Complaint Commission (HCCC) enquiry.

The tribunal found Katelaris refuses to acknowledge the experiment’s outcomes were catastrophic.

“The tribunal also found that he breached the Code of Conduct for non-registered Health Practitioners and provided health services in an unsafe and unethical manner when:

He cannot inject cannabis or its derivatives into anyone. Katelaris also received a ban from supplying or prescribing cannabis to anyone. But, as usual, Australia’s Pot Doctor sees nothing wrong with his actions. And, declares he will continue because of the benefits of cannabis. He did say he would not continue the experiment with ovarian cancer patients because of the side effects.

The tribunal referred the matter to NSW police for further investigation.

Since the tribunal’s findings in 2016, Dr Katelaris has been practising at the Church of Ubuntu’s wellness clinic. He is using cannabis oil to treat children with seizures and adults with cancer. He is a strong voice behind medical cannabis legislation. This latest arrest is another in a long history of defiance.

In 2005, Dr Pot faced prosecution for the cultivation of 50,000 cannabis plants in country NSW. He was also charged with drug possession when he brought cannabis into the court. The court verdict was not guilty of the possession charges. However, the court found him guilty of cultivating a commercial amount of hemp. Dr. Pot was so upset about the guilty verdict the court charged him with ‘contempt of court’ after Katelaris referred to the jury as sheep. He fought the contempt of court charge. Katelaris referred to the judge as morbidly obese and accused him of barely staying awake during the trial. He was further convicted and put on a three-year good behaviour bond.

This has not stopped him producing what he refers to as lifesaving medicine, particularly for children with epilepsy.

At his address at the 2010 Nimbin Mardi Gras, Katelaris told how his interest in cannabis began. He purchased a few kilograms of hemp seed at 14 years old. He went home and spread them out between damp newspaper. From all those seeds only two seedlings grew. He cultivated and planted one and would race home from school every day to see his plant. “It was more beautiful than any girl,” he said.

Katelaris told of his arrest on the way to the festival. He challenges police to come up and face the crowds if they are proud of their actions. At the time police are arresting a festival goer in the background. He taunts the police to face the crowd if arresting people for cannabis is the right thing to do.

Fast forward to 2015. Katelaris continues cannabis oil production in a laboratory hidden behind his bedroom closet door. Arrested many times before for drug related offences, he knows he will face drug charges again. But he is a man on a mission that follows no medical or scientific conventions to back his claims.

Katelaris says his primary motivation is to prove medical cannabis is a viable option, especially in childhood epilepsy. He has no problem operating openly and is defiant.

Cooper’s parents Cassie Batten and Rhett Wallace have been giving their son cannabis oil to treat his seizures. At four weeks old, he caught meningitis. This left the now four-year-old Cooper with cerebral palsy, cerebral abscesses, severe brain damage, epilepsy and hydrocephalus causing daily seizures that put him in hospital.

They said since giving Cooper cannabis oil there were no more seizures and his quality of life has improved. The oil comes from cannabis low in THC and has a mild flavour which makes it easy for children to take. British Columbia has some of the most powerful strains for making CBD oil. Cooper’s parents have hope for his future.

This positive success drives Katelaris to keep going. He needs to keep going to keep the supply up for those the treatment works for. But it is all anecdotal with no scientific research to back it.

The medical establishment does not see it this way. It has concerns about his superior attitude about his knowledge of cannabis. He has complete disregard for the scientific community. The concerns are Katelaris has no thought about long-term effects and is only interested in the immediate effects. The medical community believe it is possible cannabis has medical benefits. There also needs to be scientific evidence to ensure there are no long-term adverse effects.