The best Australian TV Shows to watch high. When you find yourself as high as a kite, settle down with some munchies to enjoy watching Australian classic television shows on either YouTube or Netflix.

Look at moire …. look at moiye … look at moiye … One of Australia’s iconic and most beloved comedy shows. There is nothing more Aussie than Kath and Kim, a show that satirises Aussie suburban life. Starring the greats Jane Turner, Glen Robbins, Gina Riley, Peter Rowsthorn and Magda Szubanski. They created a whole new slang language that has become part of our culture in some ways. Hearing the words “noice” and “ploise” is enough to make you smile. Watching Kath and Kim is a relaxing, fun way to spend some time chilling out.

The Chaser’s War on Everything

The Chaser’s War on Everything is one of the Best Australian TV Shows to watch high. It’s set out to be controversial right from the start. Everything they did was a challenge to what they saw. They used comedic publicity stunts to send issues and people up or to make a point. 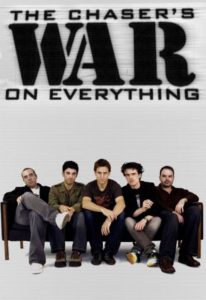 Mocking social and political issues. Like the 2007 APEC Summit and the billions of Australian taxpayer’s monies spent on protecting international world leaders attending the conference. So, they put together a fake motorcade to see how hard it was to get through the security areas.

Spending time watching the Chaser’s War on Everything is an hilarious, thought-provoking way to spend time relaxing.

Nothing like watching a bloody horror movie when off your face. An American family of tourists in Australia is unfortunate to meet psychopathic killer Mick Taylor in the Outback. He slaughters them and only the daughter, college student Eve escapes. She embarks on a mission to bring Mick to justice no matter what the cost to her. The series sees her grow into a woman, and from being the hunted to becoming the hunter. Gripping viewing especially when smoking weed.

Glenn Robbins’ character Russell Coight is a send up of the quintessential Aussie blokey bloke. This is a side splittingly funny spoof of the Australian Bush Tucker Man, Steve Irwin and the Leyland Brothers all rolled into one. It never gets old and is even funnier when high on weed.

His serious way of presenting and teaching about the Aussie bush is hysterical when everything goes wrong. And, it always goes wrong. It is a send up of ‘ockerisms’ and of how things can go wrong when you think you know it all.

Even though production of Mother and Son finished more than a decade ago, this iconic television series is still one of the best to watch high. Rerun’s are regularly broadcasted to new and old audiences alike. It is a send up of an aging mother with selective Alzheimer’s disease and dementia and a son who still lives at home. It is a hysterical story of a manipulative mother and a pathetic older son who has never married. Old school comedy that focuses on their lives together.

Underbelly is a true-life drama about the gangland crime on the streets of Melbourne in the 80s. It tells is it as it was. The first season dealt with the story of Carl Williams and the Carlton Crew, and their rule of terror on the streets as local drug kingpins. The Victorian Supreme Court originally issued a court injunction to stop the showing of Underbelly in Victoria because of how it portrayed sex, drugs and violence. It was eventually shown in Melbourne 6 months later. It is raw, unforgiving, violent drama telling the Carlton Crew story. Later seasons covered other true Australian crime stories.

This makes riveting viewing when you are off your head.

Melbourne became known as a city with one of the largest Greek populations outside of Greece by the end of the 1980s. Acropolis Now emerged as a send up of Greek life in Australia. A funny series created by wogs about wogs. It creates a world where Aussies are the outsiders rather than the wogs.

These are just a few of the Aussie greats that keep you entertained when you smoke too much cannabis and just want to chill out.

What Do You Think Are The Best Australian TV Shows To Watch High?

Please share what you think are the best TV show’s to watch when stoned. we really do need your input, and I would personally love to watch what you share. You can also email me directly.