Currently patients have to wait for medial cannabis to arrive from overseas after their doctors prescribes it. Patients cannot just take a prescription to a chemist to get it filled. Doctors import medicinal cannabis on a patient-by-patient basis. This involves a heap of paperwork for approval through the Therapeutic Goods Association and the state health department. The government requires evidence the patient meets the criteria and proof the patient will benefit. Then it has to be available overseas. Australian Federal government relaxes importing laws for medicinal marijuana. Meaning those who need it can wait for up to 8 weeks for their marijuana treatment. 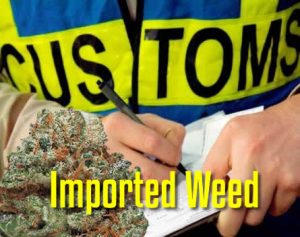 This latest government initiative allows easier access to import medical cannabis. But it must come from government approved suppliers for bulk importation and storage in Australia. This makes it available quickly to the people who need it.

Mr Hunt said recently they issued the first licence to a private program to develop a long-term medical supply. “Ultimately this is about the Government doing the right thing under the strictest conditions. Safety and quality are paramount,” he said.

This initiative is only intended to stay in place until Australia has developed its own industry to supply local demand. This could be a few years with the first private licence only being issued recently. Australian Federal government relaxes importing laws for medicinal marijuana effective in 8 weeks.

Where in Australia is medical cannabis legal?

The cannabis debate is confusing. New federal legislation relaxing the importation of medicinal cannabis is welcome by terminal patients who rely on it for their quality of life. Just to make it clear, the cultivation and selling of cannabis for recreational use is still illegal. Nothing has changed. This only affects the laws surrounding importing cannabis for sale. And, only for specific patients have access.

In 2016, the Australian federal government passed legislation to legalise growing marijuana for medical use. The legislation only allows access to cannabis through trials and special access programs by accredited prescribers.

From March, 2017, specialist doctors can prescribe medical marijuana to treat their patients. Other doctors can apply to the Queensland Health department for the right to prescribe marijuana for patients with prescribed illnesses.

A South Australian representative has said they have no intention of changing the laws.

Tasmanian doctors can prescribe medical cannabis to patients with serious and chronic illnesses starting in 2017.

The West Australian government said it was waiting for the outcomes of the NSW medical cannabis trials before considering allowing trials in that state.

Medical cannabis is not legal in the Northern Territory.

While long time medical cannabis campaigner, Lucy Haslam, says this is a great move, she said there were still issues for patients getting access to medicinal cannabis. She lost her son Dan to bowel cancer almost 2 years ago, in NSW. He was using cannabis to treat his symptoms before he died.

Australian Medical Association has cautioned its members about prescribing medicinal cannabis. Its vice-president, Tony Bartone said doctors were waiting for the results of reliable clinical trials.

While Australia advances its approach to medical cannabis, it may be too late for some patients if they cannot access what they need.

One marijuana breeder stands out globally as the leading medical cannabis strains creator. They have created the world’s strongest strain Sky Heaven Bud as well as 13 others.