Australian cannabis police busts methods often change. Well known research shows that Australia has the highest per capita use of cannabis in the world. So Police are active. This makes Australia attractive to international crime syndicates keen to cash in on the demand. Much of the profits from cannabis sales goes to fund smuggling other drugs like heroin and ice into the country. Australian cannabis police bust methods have to vary to reflect importers’ changing methods.

Catching drug runners is no easy thing, so the Australian cannabis police busts methods can get intimidating. It is challenging, especially when Australia is the grips of an ice epidemic. So, police have to use any method. This was seen in one bust of a major syndicate culminated in 13 raids in grow houses over four months. It netted 2800 plants and 25 kg of dried weed seized, along with ice, cocaine and heroin. The total haul worth more than $10 million. 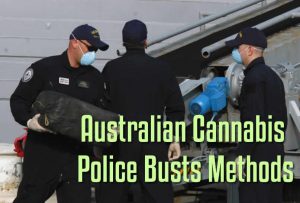 This haul was bigger than the police had thought. It came about as a result of investigating a heroin trafficking syndicate. This is forcing police to rethink their drug bust methods. Even busting one cannabis hydroponic grow house a day makes little difference to the sheer amount of cannabis grown in Australia.

What police usually do

Police usually find a grow house and then try to track the organisers and ringleaders from there. This is not always successful and uses up a lot of police resources. So, police trialled a new method of disruption. Embarking on guerrilla warfare against drug cartels. Based on a Dutch drug bust model, police destroy the product on the spot and then down those responsible. This removes the drugs from the street and smashes a huge hole in their profit. Profit diverted into more lucrative drug enterprises. It also removes the need for police to store the evidence for long periods of time.

The size of the problem is massive. In eight months, police raided 73 properties linked to three international drug syndicates. One property grew 700 plants. Cannabis seizures had a value of $25 million.

Sophisticated syndicates are smart. This is what they do. Locals find the properties, then someone leases or buys them on the syndicate’s behalf. They install hydroponic setups with plants established from grafts. Dodgy electricians bypass the main electrical supply to hide energy consumption. People check the crops, harvest the plants, dry and pack it ready for the market. And the cycle continues over and over again if not disrupted.

These operations put communities at risk. There were 44 house fires attributed to grow houses in 2015 due to bypassing electrical wiring. And, they setup operation anywhere. Across suburban neighbourhoods, rural and industrial areas. Nowhere is safe from having a crime drug syndicate operating in their streets.

Victorian police have the power to seize the assets of those busted in large (defined as 250 kg or 1000 plants) commercial grow investigations. And, they intend to use them as Victoria has a new breed of predator among the crime gangs thought to have Vietnamese connections. One gang tracked back to a Vietnamese crime ring in Canada influencing grow operations in Victoria.

Not content to setup their own grow houses and do the hard work, a new breed of criminal predator stalks Melbourne’s streets. Criminals terrorising criminals. Armed, they troll the streets looking for signs of hydroponic grow houses.

Vacant houses these gangsters raid and clean out completely. And, terrorise crop sitters (often foreign students or illegal immigrants) in occupied houses. They clean the places out of cannabis plants, dried weed and any money they found. These are serious assaults. The result is three murders. This forces the syndicates to fight back with evidence of booby trapping grow houses. Police voice concern this adds a new level of danger to police, landlords and community.

Australian cannabis police busts methods getting to the mastermind of the operation. When police get syndicate ring leaders into court the system frustrates them by punishing with a mere slap on the wrist. In one case a ringleader in control of several grow houses got a community-based order. This does not help in the fight against organised crime infiltrating Victoria’s communities.