33.7 Million Dollar Donation is the Ultimate gift of love

NSW grandparents gave the ultimate gift of love to the University of Sydney to research the medicinal potential of cannabis. Barry and Joy Lambert made an unprecedented $AU33.7 million donation to medical research. Watching their 3-year-old granddaughter, Katelyn, struggle with Dravet Syndrome prompted their generosity.

Katelyn was a normal, healthy baby up until 5 months old when she became sick. After 5 months of testing and emergency visits to hospital, Katelyn was diagnosed with Dravet Syndrome. This is a genetic condition that affects the brain’s electrical wiring.

Dravet Syndrome usually sows up in the first year of a child’s life. This rare disease causes seizures, blackouts and uncontrollable twitching. These can last for long periods of time leading to developmental delays and intellectual disability. A decline in the health of the child can begin in their second year. This puts them at higher risk of death from Dravet Syndrome effects and any other related illnesses.

When Katelyn became so ill, her grandparents lived the nightmare that had become their lives. Along with Katelyn’s parents, their only son Michael and his wife Saowalak. Treating her condition with conventional medicine on doctor’s advice. Still, the seizures continued with Katelyn admitted to Gosford Hospital many times in that year. The assortment of dangerous medicines was not working.

Michael turned to Google for help where he discovered evidence medicinal cannabis could help Katelyn’s condition. In desperation, he ordered medical cannabis from overseas. When it arrived he was wary about using it to treat his daughter.

Tragic echo from the past

Barry Lambert started his career as a bank teller and Joy a teacher. Barry studied his accounting degree by correspondence while he worked. At 36, he quit his job to start the business Count (formerly Count Financial). During the early years, the Lamberts struggled with the ill health of their middle child Nadene. Diagnosed with the rare disease macrocephalia, Nadene passed away after a long fight with the disease at 2 years old. Several years later they adopted Emma.

Watching Michael’s family struggle with Dravet Syndrome brought these memories flooding back. Joy told her husband there had to be something they could do to help. So she joined her son in researching cannabis as an option. She encouraged Michael to give Katelyn the cannabis when it arrived. 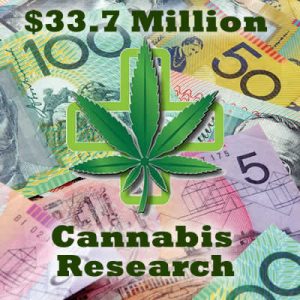 Since treating Katelyn with cannabis her seizures are fewer and do not last as long. Her condition has improved with her talking more and now even going to preschool.

The Lamberts are a wealthy family. Barry Lambert built his financial planning and accounting business from nothing. He sold the business to the Commonwealth Bank in 2011 for more than $373 million. Making him ranked 156th on the Business Review Top 200 list of wealthiest Australians. Yet the family watches the heartbreaking illness of their granddaughter. Instead of standing by, they are putting everything into researching cannabis and its medical effects. They hope to find a way to give Katelyn and children like her a better life.

Everyday Michael commits a crime that could get him a 2-year jail term. Treating his young daughter with cannabis extract is a criminal offence under the NSW Drug Misuse and Trafficking Act. Although research shows cannabis may give good results in some cases, there is no scientific proof. Cannabis remains illegal in Australia.

Late 2014, Michael met Professor Dave Allsop, a pharmacologist at the University of Sydney, at a medicinal cannabis conference dinner in Tamworth. Professor Allsop is one of Australia’s leading medicinal cannabis researchers, along with Professor Iain McGregor. They got on well and found they had a lot in common. A couple of days later Michael contacted Professor Allsop offering a $6 million donation for research. A series of meetings between the University of Sydney philanthropy team, Professors Allsop and McGregor, and the Lamberts were held to sort out the details of the donation.

Once looking into cannabis research further, the Lamberts saw a lot of value in the cannabis plant on a lot of levels. So, the Lamberts changed their donation from $6 million to $33.7 million. Lambert has also invested in Ecofibre. He wanted to invest in the grass roots of growing cannabis with a low level of THC for its medical use, edible seeds and useful fibres.

Although federal laws changed to allow controlled cultivation of cannabis for medical use, cannabis laws did no change in most Australian states. While Michael Lambert received permission from the Therapeutic Goods Administration to buy medical cannabis overseas, state law can charge him with a criminal offence for possessing or using it. So, he visited the Gosford Police Station. He told them he had cannabis oil, why he had it and that he did not want to hide it anymore The Gosford Police confiscated his supply and the was the end of it. Trying to change NSW laws, Michael wrote to politicians asking that a system be setup for access to medicinal cannabis based on compassionate grounds.

After a long fight, the NSW government announced a trial using Epidiolex. The cannabis-based treatment has reduced seizures in 39% of patients. Katelyn Lambert is not eligible for the trial as she is already being treated with cannabis. While the scientific evidence for medical cannabis treatment is lacking, there are positive signs for the future.